This page has been established to facilitate sharing of information on research into the FARMER/FERMOR families in Rotherfield c1500-1650. Any assistance in further developing these trees would be appreciated. 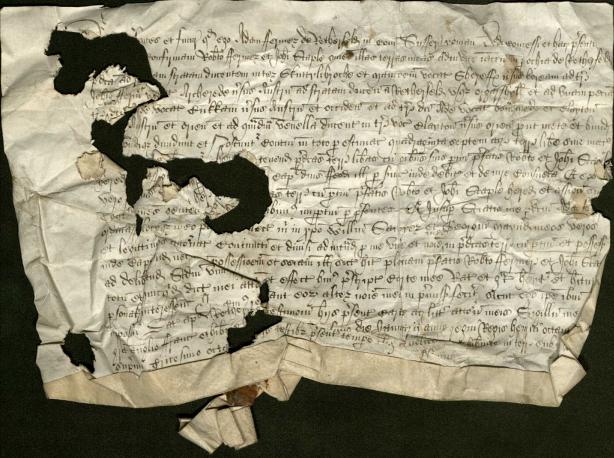 My interest stems from the marriage of John Nynne [alias Barber] to Alice FARMER in 1554 at Rotherfield. Research has suggested that the Barber alias Nynnes and some of the FARMER families were a close extended family, and researching the FARMERs has been most rewarding in revealing these connections and for explaining certain events.

There were a number of FARMER/FERMOR families in Rotherfield c1500-1600 and it is a difficult task to organise them into family trees. The existence of many family lines in the 1500s indicates that the family arrived at Rotherfield before 1500. Pullein states that the family was said to have come from Picardy in the north of France in the reign of Edward III (1327-1377) and the earliest documentary evidence for them in connection to Rotherfield is in 1384.

The families commonly associated with the FERMOR variant of the name generally descend from the family that owned Walsh/Walshes manor in Rotherfield. By the 1600s that branch had standardised the name to FERMOR and the other lines had standardised to FARMER.

Wills for the Rotherfield FARMER/FERMORs between 1529-1700 have been transcribed and a PDF book of the wills and the family trees is now available (downloadable from the PUBLICATIONS tab on the main menu).

An index of all the Wills/Admons is available under the "Other Indexes" tab on the main menu and the individual transcriptions can be accessed from there. Most of the transcriptions were commissioned by the author of this website and undertaken by Claire Wickens. All have been contributed to the Sussex Family History Group's Wills Depository.

The following Descendant Charts present most of my information for the Farmer/Fermor families. Once inside the charts, double-click on individuals to read more information. Those who left wills/admons are highlighted in yellow. Feedback regarding the family trees is encouraged.

The first is a descendants chart of the FERMORs of Walsh/Walshes manor in Rotherfield. The surname became standardised to FERMOR from the early 1600s but in the church registers before that the name is spelt a variety of ways: FARMER/FERMER/FARMOR/FERMOR etc. The chart extends through to Sir Henry FERMOR, well known for his substantial bequest to found a school at Crowborough which still stands today as the Sir Henry Fermor Church of England Primary School. Catharine Pullein’s book “Rotherfield: The Story of Some Wealden Manors” published in 1928 has two chapters which provide much of the history of the Fermors of Walsh/Walshes manor at Rotherfield.

Pullein considers this tree to be connected to Tree 1 sometime back in the 1400s. It is a substantial family tree and the marriage of John Barber alias Nynne to Alice Farmer in 1554 at Rotherfield is where this author connects to the Farmers of Rotherfield.

This tree is connected to Tree 2 but it is not known how. The will of Daniel Farmer in Tree 2, proved 1621, leaves generous bequests to the children of Joseph Farmer in the event that Daniel’s only daughter Elizabeth does not have any heirs, suggesting that Joseph is a very close relation to Daniel. The will contains the phrase “Danyell Farmer sonne of Joseph Farmer my cosen” confirming a relationship, but no other information has been found to determine how they are related.

There is also a connection with Tree 6, as Michael Farmer of Wartling (died 1600) also states in his will that Joseph Farmer is his cousin.

The fourth is a speculative descendants chart of Edward FARMER which includes his possible son George FARMER who died 1558/59 and his descendants. George's admon and information in the manorial court records have enabled a potential family line to be constructed.

The fifth is a descendants chart of Adam FARMER, a weaver, who left a will made in 1587. This tree is probably connected to Tree 4 in some manner as a George Farmer was a witness to Adam's deathbed request to the Rotherfield manorial court held 2 May 1587 to transfer the use of his house to his wife Margery, suggesting that George was a kinsman.

The marriage into the Streatfield family is an interesting feature of this tree. The Streatfields were mercers at Rotherfield so the connection to the Farmers who were weavers and tailors is understandable. The actual marriage has not been found but the intention to marry is in the Rotherfield manorial records for the court held 4 Nov 1652. Elizabeth is noted as daughter of Robert Streatfield who is documented in Streatfield wills (at Rotherfield) as being of Westerham, Kent. It is thought that this tree continues in the Westerham & Edenbridge areas of Kent, but it has not been followed up.

The family line of this Thomas Farmer would appear to go back through Warbleton and so he may be a descendant of John Fermor/Farmer who was the clerk and parson at Warbleton between 1556-1570 (his burial there on 12 Aug 1570 states "clerk & parson of this parish"). There is also an earlier burial there of a "Jone FARMER" on 14 Jan 1561 "verger" who may John’s daughter. It is known that this John Farmer was curate at Rotherfield St Denys between about 1540 and 1544 and it seems possible that he is the son of Thomas Farmer of Rotherfield who died there in 1529 and left a will mentioning his son John and John's daughter Joan (see Tree 2). John Farmer (the parson) moved around Sussex a lot (he was known to be in Brightling and Streat for brief periods of time), and given that the Warbleton parish records start around 1559, it is difficult to determine the actual family line for Thomas (c1540-1604).

A small tree with origins in the early 1500s which seems to disappear after 1629.